In part one of this blog Dylan Jones from Valleys Ale Trails and Dylan’s Tours of Wales examines the rich heritage of Welsh language pub names, including several in the south Wales valleys.

The closure of the Parc y Lan Inn at Llanddewi Velfrey near Narberth in 2015 was another blow not only to the number of pubs remaining open in Pembrokeshire but signifying the almost total extinction of Welsh names on inn signs in this corner of Wales.  Many beautiful Welsh pub names have been anglicised and replaced with English even in the heartlands of Welsh-speaking Wales 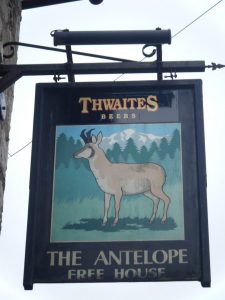 Thankfully in other parts of Wales, Welsh language names are still being used and indeed even replacing monoglot English signs for example Tafarn Y Barcud Coch (‘Red Kite Inn’) in Ammanford replacing the old name The Perrivale.  Another example being the Gwysaney Arms in Rhydymwyn, Flintshire; its old name was The Antelope. Another example includes the Tair Pluen (‘Three Feathers’) in both Bridgend and Cardiff.  I wonder would this be the result of the new wave of Welsh pride after the devolution vote in 1997?

Whatever the reason, Welsh language signs have intrigued and certainly baffled many a weary traveller in Wales over the centuries.  As in other parts of Britain, signs have reflected the traditions, folklore and romance of the surrounding areas and without doubt the language has certainly enriched inn signs in Wales.  Birds and animals adorn many a sign in the country which is no wonder with its close links with hunting and sporting activities.  Greyhound racing is depicted on the inn sign of Tafarn y Milgi (‘greyhound’) in Llannon, Carmarthenshire.  Until closing its doors in 2015 Y Cadno a’r Cŵn (Fox and Hounds) in Cwm Cuch near Newcastle Emlyn represented the sporting tradition of fox-hunting in Ceredigion.

A short-lived pub on Cardiff’s Cathedral Road was The Cadno (‘fox’) which opened in 2009 and closed its doors a year later and renamed the Cricketers, in keeping with its location near Glamorgan Cricket Club.  One of the highest public houses in Wales is called Tafarn yr Oen a Cadno (‘fox and lamb’) and can be found in Pwlldu near Blaenafan.

Continuing with the hunting theme we have the 16th century dated Tanat Valley Inn sign at Llangynog near the Berwyn Mountains.  Legend has it whilst hunting hares Brochwel Yscythrog, Prince of Powys, came across Melangell the beautiful daughter of an Irish monarch.  To avoid forced marriage she escaped from Ireland and vowed celibacy in this part of Wales and for fifteen years she went without seeing the face of a man.  On this particular day the hunted hare found solace under her robe with the baying hounds unable and unwilling to move in for the kill.  The Prince was so moved by her story that he immediately gave her land to build an abbey and it soon became a sanctuary for anyone who fled there.  She is buried at nearby Pennant Melangell and as the inn sign depicts she is now known as the patron saint of wildlife.

Another hunted animal would have been the stag and the Yr Hen Hydd (‘old stag’) can be found in Llangernyw close to St Digain’s Church where a 4,000 year old yew tree can be found.  The coat of arms of Richard II had a white hart and the Hydd Gwyn (‘white hart’) is seen at Cenarth in west Wales and not surprisingly for the area a coracle can be found hanging from the exterior wall as well.

Y Badd Glas (‘blue boar’) can be seen in Carmarthen; and in Hay-on-Wye too, but without the Welsh inscription.  The Grugiar (‘grouse’) is depicted on the inn sign in Carrog which at one time was a farm and brew house.

In part two of this blog Dylan will look at the prominence of the most common animal found in Welsh language pub names – the lion – an animal closely-identifed with one of the giants of Welsh history.