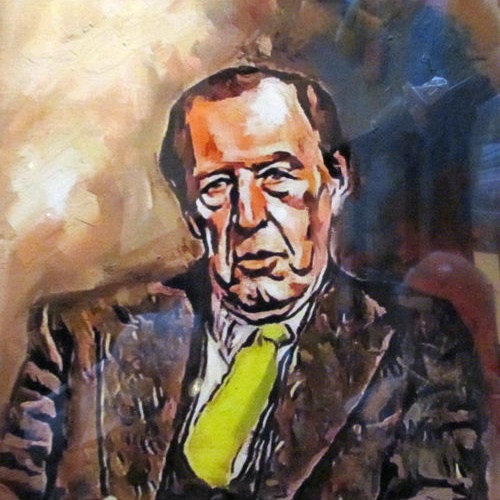 Raymond Williams was born in Pandy near Abergavenny in 1921 and the Raymond Williams Foundation (RWF) is rounding off its 2021-22 Centenary celebrations with a bus tour, curated and hosted by us at Valleys Ale Trails, of locations in south Wales related to Williams’ life and works on Saturday 15 October 2022.

WHO WAS RAYMOND WILLIAMS?

Raymond Williams was one of the C20th’s greatest cultural philosophers and socialist thinkers. In a three year period in a prolific writing career Williams published two seminal, iconic intellectual texts – Culture and Society (1958) and The Long Revolution (1961) – that sandwiched his most famous work of fiction Border Country (1960) set in and around the fictional town of Gwenton (based on Abergavenny).

Williams studied and later taught at Cambridge University, continuing to be a perceptive and radical thinker, literary critic and writer of fiction; the latter invariably having connections with Wales. He died prematurely at 66 in 1988 but his influence remains undimmed. Indeed, his teachings are gaining a new audience as a new generation finds inspiration and challenge in his work of the back of the RWF’s Centenary celebrations that have aimed to reintroduce some of Williams’ key ideas to contemporary public spaces and fora.

Starting in Raymond Williams’ home ‘border country’ village of Pandy, the day-long tour will visit by bus Abergavenny, Merthyr Tydfil and culminate at St Fagans National Museum of History, a location in Williams’ 1978 political thriller The Volunteers. Speakers from the world of literature and politics will animate the tour with insights into how Williams has influenced their thinking and writing. The first confirmed speakers are writer and Guardian columnist Jude Rogers; former Plaid Cymru leader Leanne Wood; and writer Darren Chetty. More will be announced soon.

It is aimed primarily at those people who have recently discovered Raymond Williams and who have a growing enthusiasm for and curiosity in his work. It will be of particular interest to people involved in/with:

Early bird tickets are available at Eventbrite with reduced prices for students, the unwaged and Universal Credit recipients. Everyone who joins the tour will receive a complimentary copy of Red Pepper, a quarterly magazine and website of left politics and culture.

ABOUT THE RAYMOND WILLIAMS FOUNDATION

The RWF is a charity that promotes adult education and community based and collective learning in order to achieve the ‘Long Revolution’ for which Williams advocated though his work and throughout his life. You can follow the RWF on Twitter at @longrevolution or visit its website.